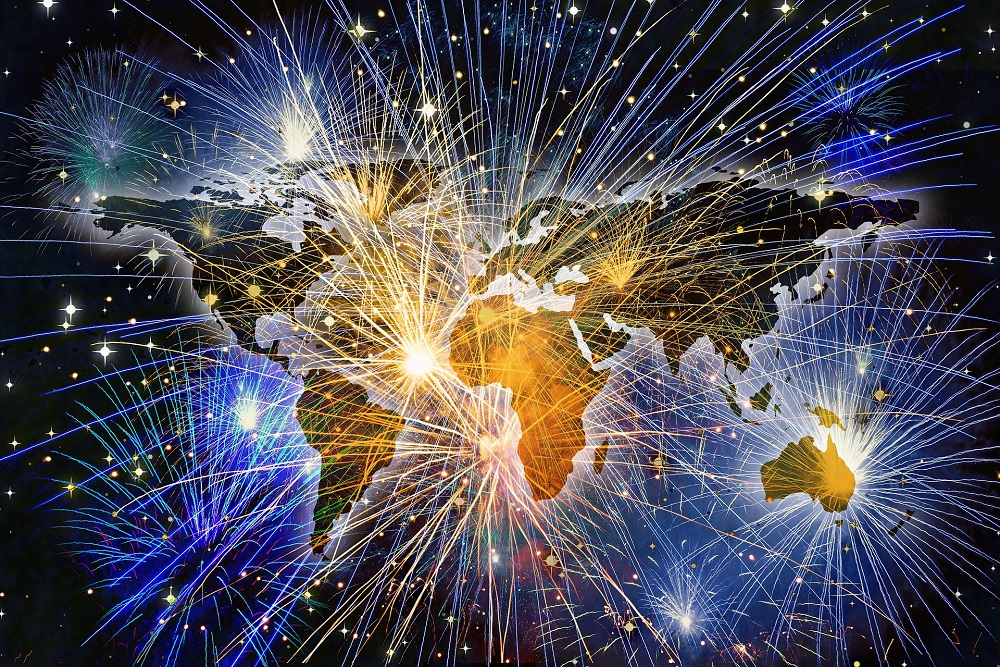 People all over the world clearly agree: The New Year should bring happiness, health and wealth. Different traditions and customs reconfirm that wish.

Portugal
12 grapes are eaten from the first stroke of midnight to the churches 12th bell chime. Anyone who manages to eat all of them will have good luck in the New Year. Holding a coin in your hand at midnight will also bring you financial luck in the coming year.
Wearing of new clothes and a ritual bath are intended to spread happiness and money blessings of the people. A lot of noise, vim and vigour drive away evil spirits. The best way to do this is to jump from a chair around midnight, smash crockery and bash pots and pans together.

Brazil
Dress code in the New Year’s Eve expresses the wishes. The colour of someone’s undergarments is expressing pretty much – yellow stands for prosperity, white for peace, pink for love and red for passion.
The biggest New Year party takes place on the Copacabana beach. Anyone who manages to jump over 7 waves will be granted a wish for each one. Twelve grapes are eaten at midnight and a wish is granted for each. If you want to boost your luck in love a bit, just keep seven grape seeds in a paper. A money blessing is supported by a kept in the purse gifted bayleaf.

Scotland
Christmas Eve and New Year’s Eve are not celebrated there. Instead a traditional winter festival named “Hogmanay” takes place. Starting on the 31st of December and lasting for a couple of days. People celebrate with a bagpipe music, the traditional drink “Hot Pint”-a strong mixture of beer, whiskey and eggs. A tradition named “First-footing” includes asking a good friend or neighbor to pass the threshold of your house and to bring good luck to your home.

Vietnam
The New Year begins according to the lunar calendar, meaning the spring festival takes place about one month after the first of January.
It is believed a God lives in every house. These are said to fly into a heaven on a carp, where decides on their fortune or misfortune in the New Year. That is why a carp is bought and released into a body of water by a family, enabling the God to travel to heaven.

Bulgaria
As for the traditional celebration of the New Year, it requires special dishes, amongst which a special banitza with white cheese, in which fortunes for the New Year are tucked.
One of the most common New Year customs is the so called “survakane”. Children, gathered in a group, walk around relatives’ and neighbours’ homes with a special “survachka”. It is a tree branch decorated with popcorn and dried fruits strings, colourful wool threads, ring-shaped buns. They start first with the eldest member of the family they are visiting and wish blessings to all the family. In return, the hosts give them some money, walnuts, dried fruits and small presents.

Iceland
New Year’s Eve here is an epic party scene and a magnificent spectacle of midnight fireworks. Beside the 500 tonnes of fireworks detonated during the only week in the year, when it is free-for-all there are some more interesting traditions.
Community bonfires are popular throughout the country seaside. These massive fires are a chance for friends, families and neighbors to gather in the early evening, feel warmth of the fire, reflect on the year behind them and spread their well wishes for the year ahead.
Half a century tradition, gathering upward of 90% of the populations is a sketch comedy TV show poking fun at the top news headlines of the year past.